India has a diverse climate which ensures favorable cultivation of many fruits and vegetable varieties. Following China, India ranks second in the world in terms of fruit & vegetable production. In vegetables, India is the largest producer of okra and ginger while it ranks second in the production of onion, potato, cabbage, brinjal, cauliflower among others.

The major importers of Indian vegetables are Bangladesh, Nepal, Netherland, UK, Oman, Malaysia, Qatar, Sri Lanka, and UAE. Indian agriculture system and favorable climatic conditions allow Indian farmers to produce a large number of vegetables on a seasonal basis. Also, various advancements in agricultural technology and the adoption of resilient varieties allow India to produce sufficient vegetable crops. Besides growing a lot of indigenous vegetable varieties, India grows non-native vegetables that have become so popular and are consumed in heavy demand. Let’s introduce you to few such vegetables which are non-native to India, yet these are found in every Indian kitchen and are majorly grown throughout the country. 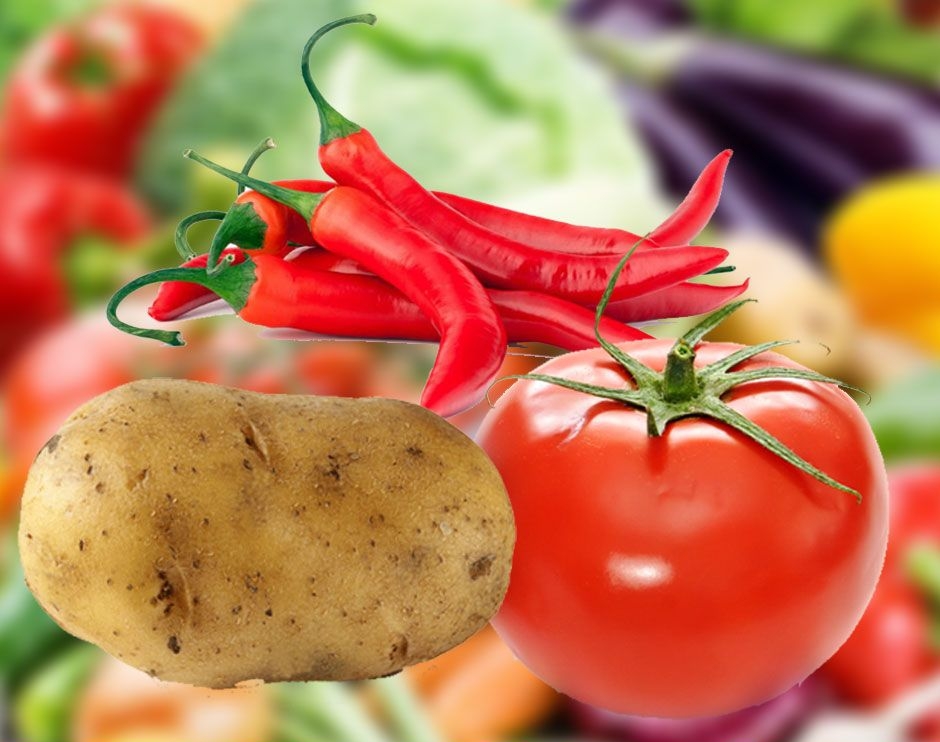 The most popular among vegetables, potato, has its root in South America. This tuber was introduced to India in the 1600s through Portuguese traders. Due to selective breeding approaches, today, the world has about 5,000 varieties of potatoes. Although potato remains an essential crop in Europe but in the past few decades southern and eastern Asia exhibited rapid expansion in the production of potatoes, especially in India and China.

Potato is considered the most widely consumed vegetable throughout the world. It led to several biotechnological improvements in potato yield utilizing various scientific innovations as a base to develop more nutritious, resilient, and improved potato varieties. Amflora potato developed by BASF is a genetically modified starchy potato which only produces one particular type of starch, for industrial applications, this optimises the further processing of starch and saves energy and water. In paper manufacturing it makes fillers and pulp adhere better, saving both energy and raw materials. Apart from the processing stage, its end products too are useful, e.g.it makes Printer paper glossier, and yarn can be processed better. Similarly, potato variety Fortuna was developed to resist late blight. (Source: https://en.wikipedia.org/wiki/Potato). Currently potato is not only being improved for disease resistance but also for nutrition with vitamin A enriched golden potato being one such improvement.

This flavorful, tangiest delight first originated in western South America and Central America. It requires a temperate climate to grow. India is home to all seasons which makes it the most suitable choice to grow tomatoes. It came to India during the 16th century through Portuguese traders.

Tomato has thousands of cultivars that grow throughout the world. In India too, the tomato has reserved a considerable place in household kitchens as well as fine dining. Due to its popularity and wide range of consumption, scientists became curious to bring sustainable changes in the tomato yield through scientific innovations which resulted in more nutritious, longer lasting and resilient tomato varieties. For instance, tomato variety like Flavr Savr has been developed to increase the shelf life. Major breeding programs to enrich tomatoes for better nutrition and health benefits are under process.

(source: https://en.wikipedia.org/wiki/Tomato#Genetic_modification). The ever-present demand for the vegetable has made it a popular vegetable in urban farms and green houses.

Since chili pepper grows worldwide and has distinctive significance in improving nutrition count of any meal, it has also gone through noticeable genetic improvements to make it disease resistant, high yielding, and nutritionally enhanced through various breeding applications.

Through the advancements it can be seen that no matter where the vegetable originated, it was made to adapt to varied climates andimprove through selective breeding by farmers and using scientific advancements to make the crop nutritious and increasing the shelf life. We can save our favorite vegetables from pests, diseases and abiotic stresses through adopting new advancements in the field of agriculture whether it be seed, fertilizer, AI or mechanisation. The more we believe in science, the better will be our people free of hunger and malnutrition.