India is the world’s leading producer and exporter of spices. The spice industry has played a significant role in the last seven decades. Spice growing, processing, manufacturing, grading, marketing, and other associated industries have long been a key source of income for people in India. Due to their incomparable aroma, flavor, and medicinal potential, Indian spices have been popular globally. The lure of spices led Vasco Da Gama to chart a sea path to India, and his arrival on the coast of Kerala in 1498, changed the world spice map forever. Indian spices are used in some of the world’s most well-known foods, including Mexican sauces, English curries, and Kahwa (popular Arabic drink). In India, spices have traditionally been farmed on tiny plots of land, with organic cultivation being popular and a norm for some spices.

India sells spices to almost 180 countries, with exports rising from USD 230 million in 1987 to around USD 5 billion today. Spices like turmeric, ginger, coriander, and cumin are in high demand. So far, 26 Indian spices, including green cardamom from Coorg, Mizo ginger, and Kanyakumari cloves, have been given the GI (Geographical Indication) label. However, there are difficulties when it comes to export of raw spices. Many other Asian and African countries have a cost advantage over India. Let us look at how India can remove bottlenecks in the spice supply chain and accelerate the growth of spice exports. 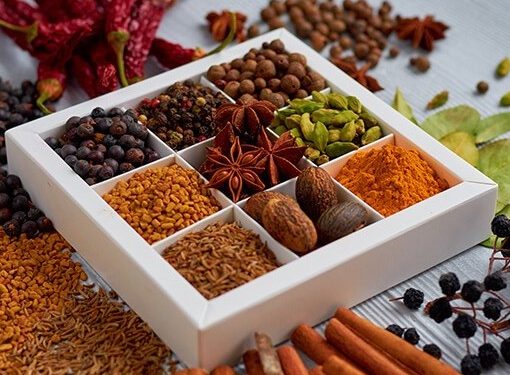 There is a consensus among stakeholders that India’s spice industry needs to focus on enhancing exports of value-added spices. Given the constant competition from low-cost economies, value-addition is critical to maintaining India’s leadership position in the global spice market. The Spice Board has reintroduced value-added programmes and is publicizing the benefits of different government initiatives aimed at encouraging value addition for exports. Through the eight spice parks built up in major production centers across India for the benefit of growers and entrepreneurs, the Spice Board has enabled access to primary processing and value addition in spices, assisting in greater price realization.

Most of the latest trade restrictions erected against local producers revolve around quality. India needs to upgrade its production and manufacturing systems to match the high quality and food safety standards set by countries around the world. India’s goal should be to maintain the Indian spice industry’s competitive edge while also focusing on meeting demanding quality and food safety regulations.

The Spices Board has digitized essential compliances as part of the Commerce Ministry’s initiative to streamline compliances and make doing business in India easier. As a result, the method for issuing Certificates of Registration for Spice Export has gone completely online. In this connection, the Ministry is now reviewing the Spices Board Act in order to remove restrictive measures and create a more business-friendly environment.

The Spice Board is re-launching the Spice House Certificate (SHC) as a mark of quality and food safety conformity with worldwide standards. The SHC will provide credibility to the holders in the eyes of the worldwide spice community as a mark of quality and safety compliance. The Spices Board and the Quality Council of India have signed a Memorandum of Understanding for the implementation of a project aimed at doubling spice exports and enhancing farmer income through IndGAP certification in order to improve Indian spices’ competitiveness in the worldwide market.

The Indian government has indicated its intention to build up laboratories all across the country in conjunction with BIS (Bureau of Indian Standards) and FSSAI (Food Safety and Standards Authority of India). To establish a reputation for quality and efficiency of service, the Spice Board is looking to expand the reach of its quality testing laboratory network to all parts of India and adhere to the highest standards. It is critical for all stakeholders to work together and enlarge the component of spices sector in India’s exports. All such efforts would certainly lead to a higher recognition of “Brand India” which is already quite popular all across the world.

The Spices Board is working to improve the e-spice bazaar platform to make sourcing spices from exporters easier. It has signed a Memorandum of Understanding with the United Nations Development Programme (UNDP) for a pilot project to build a “Blockchain Traceability Interface for Indian Spices.” UNDP is developing this interface, which will be connected to the e-spice bazaar web.

For the domestic and global sale of spices and spice goods, the board has partnered with top e-commerce platforms to onboard entities like FPOs, progressive growers and entrepreneurs. The board, in collaboration with top e-commerce companies, has offered the required assistance to spice producers, groups, and FPOs in listing their products on e-commerce sites for online sale. With this technology-enabled ecosystem, the stakeholders will have access to a plethora of commercial opportunities.

Elachi Online, a new integrated platform for cardamom commerce, recently began trading roughly 65 tonnes on a pilot basis at the principal trade center in Bodinayakanur, Tamil Nadu. With the help of Gurugram-based Intello Labs, a startup founded by IIT Mumbai alumnus, KCPMC Ltd, a renowned name in the cardamom sector, has built the portal. The platform will soon be multi-locational, allowing traders to trade the same lots of cardamom from multiple locations at the same time. This would be extremely advantageous to traders, particularly during epidemic times when people are having difficulty travelling to trade/auction locations like Kerala or Tamil Nadu. Spice Story, a food startup selling spicy chutneys across 23000 pin codes, is looking to expand its business in India and international markets, by entering into new categories including Indian spices.

The Indian spice industry hopes to increase the share of value-added products in the export basket from 50% to 70% by 2026.  The Indian government is taking a multi-pronged approach to help make Indian spices a bigger attraction. For example, collaboration with state governments is being considered to organize tours, sampling festivals, and exhibitions to raise awareness about Indian spices throughout the world. The government has declared its intention to scale-up India’s exports to USD 10 billion in the following five years, by 2027, and then double again by 2032.  This will help create new jobs in tier-1 and tier-2 cities leading to a ripple effect all across the economy. All this augurs well for the Indian spice sector, as it is set to create bigger footprints in the global spice trade.