In the last few decades, agriculture has seen a new phase of contemporary modernization due to advances in scientific understanding and technical innovation. However, a rapid increase in agricultural productivity has also weakened sustainability and depleted our natural resources, resulting in nutrient-poor soil and declining water tables. Additionally, shifting climatic circumstances have accelerated farmers’ susceptibility to diminishing crop productivity.  To bring back balance to the global food supply chain, we must explore sustainable crop alternatives and find ways to increase farmer income. Traditional grains like millet can play a crucial role in developing long-term strategies for achieving nutritional security. 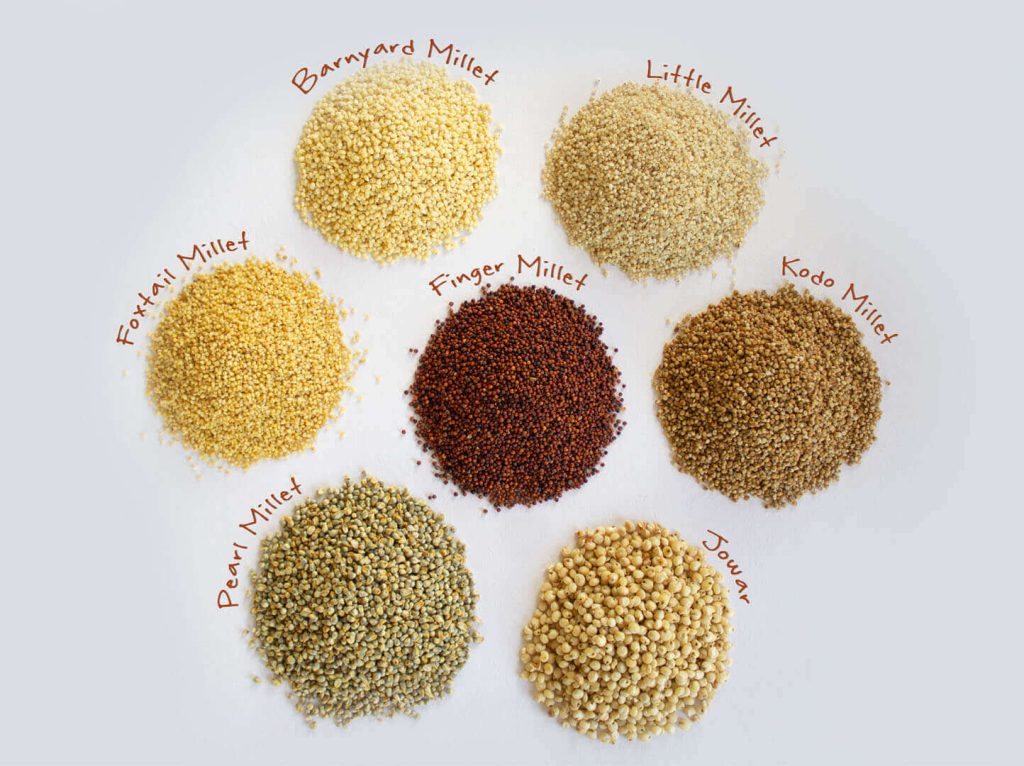 RURAL COMMUNITIES HAVE A RICH HISTORY OF TRADITIONAL GRAINS

Millets were among the first cereals to be farmed, dating to the paleolithic era. They have been part of our diest as “priyangava” or foxtail millet, “aanava” or barnyard millet, and “shyaamaka” or black finger millet in some of the oldest Indian writings, including the Yajur Veda.

For example, millet was a crucial energy source for the Khasi people in Meghalaya even before they started growing rice and purchasing wheat. Different millets were developed and adapted to the local habitat through time as seeds were kept and passed down through farming generations. This ecosystem included the soil, climate, altitude adaptability, and water availability. Cultural preferences also influenced the selection process; for example, some millets like Raishan were selectively grown because their seeds had a specific flavor, texture, or appearance.

Rice and wheat have been critically important to India’s food security and the population’s nutritional security. However, people living in challenging terrain without enough water to farm rice and wheat are not adequately self-sufficient in food.  Tribal people are particularly vulnerable. In these locations, the provision of food has been greatly influenced by traditional crops. Physical, socioeconomic, and technological limitations define the majority of drylands. The severe circumstances are ideally suited for several traditional crops, like coarse grains.

Coarse cereals have been the foundation of agriculture, food, and cultural traditions in rural India, particularly in the enormous tracts of dryland belts spanning across the Deccan plateau, northern Karnataka, Marathwada, the deserts of Rajasthan, and the tribal territories in central India. But these crops saw a major downfall due to declining demand and a lack of marketing opportunities.

Many vulnerable communities are facing food insecurity and are now chronically malnourished due to the switch to meals based on rice or wheat. In India, over 50% of women are anemic, and zinc deficiency has skyrocketed in the states where millet production has declined the most. A significant portion of the Indian population is calorie-rich but lacking in micronutrients; millions of Indians are figuratively overfed and undernourished.

Millets have a low carbon and water footprint—rice plants require three times as much water to thrive—can grow in poor soils, and do not require a photoperiod for flowering. Millet crops can tolerate drought, don’t spoil quickly, and don’t require a lot of pesticides, fungicides, or other chemicals.

More than half a billion people in Asia and Africa still use millet as their primary source of nutrition today. Because of their poor productivity, it is challenging to use dry soils to produce enough high-quality grains. In terms of growing conditions and high nutritional value, millets outperform other grains like wheat and rice and also as climate change-resistant crops. These nutritious cereals contain vitamins, minerals, vital fatty acids, phytochemicals, and antioxidants that can aid in the eradication of a variety of ailments caused by a lack of dietary nutrients. The production of millets can enhance the productivity of dry lands and guarantee future food and nutritional security.